If you’ve been reading my blog since a while ago then you will know that I need glasses. You’ll also know if you follow me on social media that I’m a little bit naughty and avoid wearing them at all costs, which has actually had my optician tell me off once. Yikes. With all of this in mind, I thought I’d write a post talking about the struggles of wearing glasses!

Yep, this is number one. I don’t drink a lot of tea (and I’m meant to be from the UK?) but I do love a hot chocolate and well, my glasses do not like the steam. On the plus side it helps make your glasses cleaner so this one works both ways.

Last month I actually sent my sister a Facebook message asking her how she wears glasses without getting foundation on them. Here is her response: 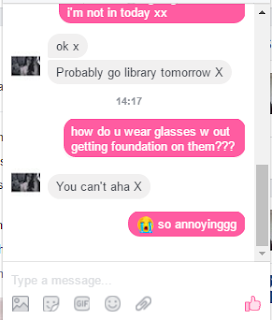 Less than pleased about this, my foundation covered glasses and I moved on with our day.

Another thing that completely sucks about wearing glasses? Lying down. Yep. My snapchat friends know this best as I’ve sent out snapchats complaining about this one a few times now. They even push up slightly too, so it doesn’t even look cute.

Once upon a time, I wore purple glasses. Admittedly this was years and years ago, but I’d never do that now since I have a bad enough time matching my glasses with what I’m wearing as it is. I have four pairs and even though my black pair match everything and its great, I dislike them the most, and I have a pair of those round ones everyone has, but I don’t wear them too often since again, doesn’t really match my look, and my oldest pair which don’t match my prescription so why would I wear them? The pair I’m wearing in the photos are the ones I wear the most. They do match everything, but it gets boring after a while.

When you make an effort with eye makeup

I used to do eyeshadow. Used to. Now I just do eyeliner and hope for the best, as my glasses never did my eyeshadow justice whatsoever.

Going to the cinema is my favourite pass time. But only if the film is in 2D otherwise it’s an awkward game of trying to fit 3D glasses on top of your prescription glasses.

When they’re constantly getting dirty

For some reason I’m constantly cleaning my glasses, and sometimes I don’t even have shirts with a fabric that I can clean my glasses with and nobody carries their actual glasses cloth around with them, so I’m stuck with an annoying spec of dirt on my glasses until I can find a decent fabric.

The price of glasses

Yeah, this is one I really hate. Everytime I get my eyes checked it has to be after payday otherwise I’ll be in panic mode. My current pair of glasses cost me over £100 and I had a deal, two for £100 — now I know that’s not loads, but there’s been times where I’ve been close to buying just a one pair of £125 glasses and let me tell you, that is not a price I’m even willing to pay in the first place.

This doesn’t happen with my newest pair just because I paid extra for add-ons with my actual lenses, but with my pairs that don’t have this, selfies are a nightmare.

Well, that’s all for my list of the struggles I have when wearing glasses. This was a more chilled back post but we need to loosen up every now and then!

Can you think of anymore struggles? Let me know!